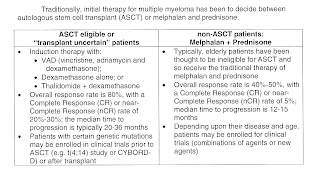 Every year, about 2,000 Canadians are diagnosed with multiple myeloma (4 per every 100,000 people). So we estimated that in any year, about 6,500 people are living with this disease. The median age of multiple myeloma patients is about 65 years, although its incidence in younger adults appears to be increasing.
There are a number of factors which determine which drugs are available in Canada for treating multiple myeloma. First, to be used in Canada, the drug must be approved by Health Canada as safe and effective. Second, in order that people can access the medication, there must be funding by the provincial health insurance programs. Myeloma drugs currently approved for use in Canada include melphalan, cyclophosphamide, bisphosphonates (pamidronate, zoledronic acid and clodronate), Velcade (bortezomib) for front-line combination therapy or second-line therapy and lenalidomide (Revlimid). Thalidomide can be obtained through special access programs.
Traditionally, initial therapy for multiple myeloma has been to decide between autologous stem cell transplant (ASCT) or melphalan and prednisone. Editor note: See Table summary above (Right Click Image above to Enlarge) The paper was presented at the Ortho Biotech Multiple Myeloma Patient Advisory Board Conference at the past weekend in Toronto, Ontario. Address your congratulations to: the Manager National Community Relations: Ms. Sue Robson, R.N. at mailto:asrobson@obica.jnj.com

ASCT Eligible Patients:
New approaches before ASCT are being investigated to see if achieving high rates of CR/nCR or VGPR (very good partial response) prior to transplant will improve outcomes. Multiple induction regimens containing novel agents are being tested. Canadian trials include DBd (Doxil + Velcade + dexamethasone) and CYBORD-D (cyclophosphamide + Velcade + dexamethasone).
Studies are also under way looking at the best way to treat patients with specific genetic mutations. The translocation t(4;14) mutation, in which parts of chromosomes 4 and 14 incorrectly attach to one another, occurs in 15% of myeloma patients, frequently among younger individuals with the IgA lambda subtype. It is often associated with another genetic mutation (13q deletion). When this mutation is present, although the myeloma may respond well to therapy it also relapses quickly, which makes it an aggressive disease to treat. In cases of relapse, the disease appears to respond better to either bortezomib or lenalidomide. For this reason, a trial is currently underway among newly-diagnosed myeloma patients that involves induction therapy with bortezomib, doxorubicin and dexamethasone for 4 cycles, followed by CYBOR-P for 8 cycles and dexamethasone maintenance therapy. ASCT is not performed as part of initial therapy in this trial, due to the strong activity of Velcade in this subtype of myeloma. Another mutation that is currently being studied is TP53, in which a copy of a tumour suppressor gene is missing. TP53 deletion occurs in a number of forms of cancer, including myeloma.
"Transplant Uncertain" Patients"
A number of trials are looking at induction therapy in "transplant uncertain" patients. This approach most commonly has used continuous suppression with immunomodulatory agents (IMiDs, such as thalidomide or lenalidomide) and dexamethasone. The ECOG trial used thalidomide and dexamethasone; the overall response rate was 63% with a CR rate of 8% and the median time to progression was 22 months. The ECOG E4A03 study compared Revlimid and either high or low doses of dexamethasone. Although the overall response rate was better in the higher-dose dexamethasone group (82% vs. 71 %), there were also more early deaths. The optimal dose of dexamethasone, therefore, remains uncertain although we know that continuous full dose appears detrimental. In a small subset of patients in the ECOG E4A03 trial who subsequent underwent ASCT, results were similar between the two groups. However, it must be kept in mind that the comparison between Revlimid plus dexamethasone and ASCT was not studied in a randomized fashion.
Another approach for "transplant uncertain" patients has been the use of 6-8 cycles of combination regimens that usually contain chemotherapy drugs with novel agents such as thalidomide, velcade and/or Revlimid, followed by a treatment break. This approach has not been as well-studied, and the results compared to ASCT are unknown at present.
Melphalan-based Approaches
A number of studies have combined traditional melphalan + prednisone (MP) therapy with other agents. Three, including the IFM 99-06 trial, found that in elderly patients adding thalidomide makes the therapy more effective. In another trial, it was found that adding Velcade also increased the effectiveness of therapy, compared to MP alone. However, adding thalidomide or Velcade also increases toxicities or side-effects, such as low white blood counts, blood clots or peripheral neuropathy.
At this point, it's not known whether adding a novel agent (such as thalidomide or Velcade) is as effective as when you give it during initial therapy or later, after relapse. More evidence is needed on how to proceed with high-risk patients, such as those with specific genetic mutations. Recent Canadian trials include the NCIC MY 11
study, an Ortho Biotech trial of melphalan, prednisone and Velcade (bortezomib) and the Celgene MM020 international trial (comparing three regimens: lenalidomide + weekly dexamethasone until progression, lenalidomide + weekly dexamethasone for 18 months, vs. MP + thalidomide).
Summary:
New agents and combinations are becoming available for all age groups and are contributing to better survival for myeloma patients. The optimal approach for induction and disease progression has yet to be defined, however. We suspect that different approaches may be needed for different patient groups (e.g., those with and without specific genetic mutations). Research is trying to match the best therapy with the different disease sub-types. Funding limitations remain a problem; access programs and clinical trials are means by which patients may obtain new medications before public funding is provided.
Posted by Myeloma Atlantic at 2:12 AM

This from Ken in Singapore...

I just wanted to commend you on setting up the blog…..I look forward to reviewing all new entries.

I also look forward to meeting you upon my return to Canada next July. I plan to have my stem cell transplant here in Singapore in February, giving enough recovery time before I return. Treatment here is first class thankfully.